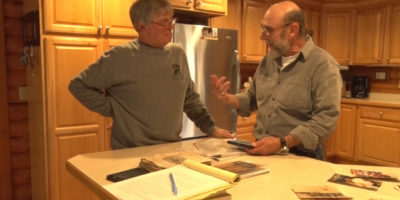 A DNA Test Led One Bemidji Man To Find His Roots

For years, local Bemidji author Wendell Affield didn’t know who his biological father was. Now 72 years later, after taking a DNA test, his discovery led him to not only the identity of his father but much more. After finding old documents in an old chicken house just north of Bemidji, Wendell began his quest to find his biological father. In 2015 after taking a DNA test, what he discovered instead was an 85 percent match to family in Long Island, New York. “You know it was a sense of disbelief, I suppose, after so many years, I had kind of accepted the fact that I would never know who my biological family was. And when Louis called, it just really opened a whole new world,” said Affield. In the spring of 2019, Louis Grignon from Long Island received a package from Bemidji, Minnesota. “First reaction is, ‘I don’t know anyone in Minnesota, but let’s see what’s in there,’” Grignon said. Inside the package was an introduction letter and some of Wendell’s Affield books. Grignon says the letter had enough information about his father, his brother, his grandfather and his great-grandfather that he decided to give Affield a call. “I had a few questions for him, and one of them being primarily how could they have – where would they have met,” Grignon said. It was the mention of a little farming village called Seldon on Long Island that piqued Grignon’s interest and a picture of Affield himself. “He looks more like my father than me and my brothers do,” Grignon said. “So I took the DNA test and the results came back in a couple of months. And yeah, they were 100 percent positive Wendell is my brother,” After emailing back and forth, Affield went up to New York for the first time this past summer with his sister. “We spent the night in Stanford, Connecticut, where my mother grew up. Right across from Long Island. The next day we drove across, we took a ferry across to Long Island and traveled up to the very point where Louis a and his wife Patty live. And it was just an amazing connection,” Affield said. Before discovering his half-brother from Long Island, Affield had eight half-siblings from his mother’s side. Now with six new half-siblings from his father’s, he has a total of 14 siblings. Grignon is the first of his half-siblings to visit him in Bemidji, and he says it’s been a wonderful trip. Wendell has taken him all over town and even up to the old chicken house where his search first began. Affield says he had an amazingly positive experience connecting with his family. Lakeland News is member supported content. Please consider supporting Lakeland News today.Donate Today

Copy and paste this URL into your WordPress site to embed

Copy and paste this code into your site to embed