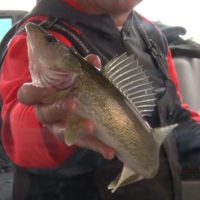 Not even the near zero temperatures could keep anglers off the ice for this year’s Brainerd Jaycees Ice Fishing Extravaganza.

Nearly 9,000 people were on the frozen Gull Lake Saturday, hoping to reel in the catch of the day. Over the course of the three-hour tournament, 836 fish were weighed in with the top 150 going home with prizes.

“It’s the Super Bowl of ice fishing; I call it the eighth wonder of the world – if you haven’t seen this you got to see it,” Clint Meyer, Ice Fishing Extravaganza Chairman, said. “I’m curious to see what it’s going to take, I might just take a guess and say it’s going to be a four pound fish, maybe a walleye; it would be cool to see a walleye win it again this year.”

Walleye dominated the top half of the leaderboard, but first place went to Gary Creger who reeled in a northern pike weighing in at 5.2 pounds. For his first-place finish, Creger had the choice of a new Ford or GMC from Mills Automotive Group.

“Before I set the hook he felt pretty good taking the line out,” Creger said. “Once I got him out, I thought it was going to be close to the top.”

Only four fish caught at the extravaganza weighed over two pounds, including Darrell Smith’s second place walleye weighing in at 2.92 pounds.

“It’s dumb luck, and I’ve always been lucky fishing,” Smith said. “I was talking to the neighbors and I looked and the bobber was down, I went over there saw it bob a couple times, then I just set the hook and pulled it up.”