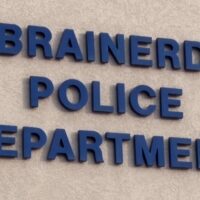 2 Juveniles Arrested for Threats of School Violence in Brainerd

Two juveniles were arrested late Thursday evening, December 16, for threats of violence to the Brainerd School District. Based on the investigation and the recommendation from the police, Brainerd Public Schools canceled school on Friday, December 17.

According to a news release from Brainerd Police Chief Mike Bestul, both juveniles are being held at Northwestern Minnesota Juvenile Center pending charges of threats of violence.

Laine Larson, superintendent of Brainerd Public Schools, said she met directly with local law enforcement to determine whether there were any credible threats to Brainerd Public Schools. She stated in an interview with Lakeland News that she was on a conference call with local authorities when they said there were things they needed to investigate. Because they didn’t have enough time to have a thorough investigation before school started, they recommended closing the school for students and staff.

Larson sent out an email to parents notifying them the school would be closed Friday, December 17. Two juveniles were later arrested Thursday evening for threats of violence made toward the Brainerd School District.

In the press release, Chief Bestul says, “It is our goal within law enforcement to have all school activities resume within the district as soon as possible. The safety of the students, staff, and community will continue to be the driving factor in all decisions that are made.”

The release also said, “Law enforcement continues to follow up on any new information pertaining to threats involving the Brainerd School District and will continue to communicate with school staff.”